Do you know enough about Turkey, a giant that straddles Europe and Asia? This is an interesting article about Turkish politics.

This article contains some interesting thoughts about how we war in Syria can be resolved.

In the long run the West would be better served by an alliance with Iran rather than Saudi Arabia.

I guess there could be situations where a military coup is defensible, especially if a democratic elected leader moves strongly in autocratic and tyrannical direction I can’t see that Egypt was quite there. It is disgusting to see that the west (grudgingly) accept a military coup just because we do not like the leader that is ousted.

It is no doubt that Morsi mishandled the situation, no doubt that he had misunderstood his mandate and created strife instead of consensus. Still it does not make a military coup defensible.

I should have written something. Something that made Obama quit his craven dronekillings of innocent Pakistani and Yemenites.

I should have written something. Something that made the politicians in Europe stop punishing working Greeks and Spaniards for the mistakes of the bankers.

I should have written something. Something insightful of why the US election ended up as it did.

I should have written something. something that made people take notice of our climate.

I should have – but instead I went skiing.

I’ve been on vacation. A glorious week in Egypt, with my wife, kids, sun and warm water.It can hardly be better, but as the good socialist and pietists I am, there is always at least one negative.

The Norwegian author, Bjornson, in the play “Kong Sverre” let one of the characters say:

Evry happy moment you were granted here on earth
must be paid with sorrow
If more are followed, believe,
they are only granted as debt. (my probably bad translation)

The hotel we lived at in Hurghada is owned by one of the richest men in Egypt. He gets my buck, not the local people. On the other hand, the money at least  stays in Egypt (we hope) and not elsewhere.

However, tourism accounts for over 10 percent of the economy in Egypt. The country can not get on without tourism. Maybe that’s why this t-shirt made it easier for the socialist and pietist to relax below the hot Egyptian sun? 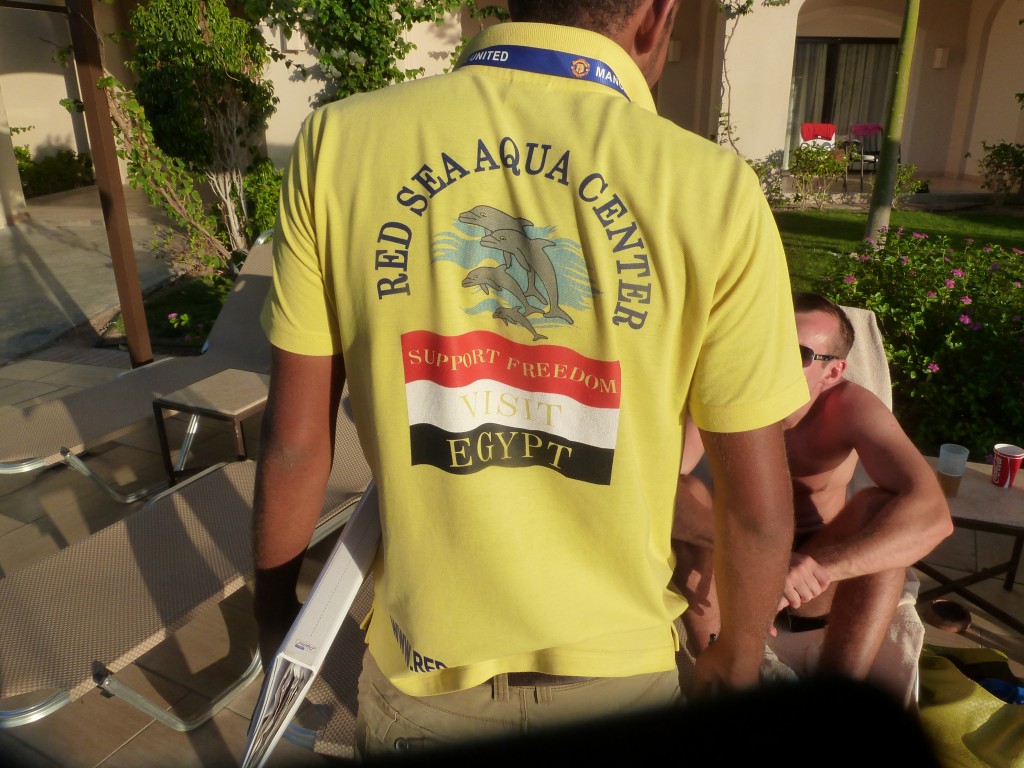 This week more than 3000 scientists, bureaucrats and industry representatives have congregated in Montreal for the IPY 2012 conference called “From knwoledge to action”. The main problem with the conference is that there has been a lot og knowledge and very litle action.

My expectations might have been a litle off, but I do believe that a coneference that gives itself the title “From Knowledge to Action” must strive to combine policy and science, scientists and politicians. And, if it was not possible to get the politicians onboard, the onus is on the scientists to formulate the policy implications of their work. Without doing this the science stays in its ivory tower without gaining traction in the real world.

The conference shows the huge implications for the Arctic of climate change, the change for local societies by the effects of globalization and that we still need more information on all these aspects. To be able to handle this we need the politicians to act, on globalisation, on climate change, and on providing funds for further studies and even longer time series. On this important field the conference seems to me to be a failure.

I think one of the reasons of this is that the community that is here is so damned polite and restrained. Where is the fired up discussions on scientific priorities, on policy or on relationsships between indeginous populations and majority populations? They might be here, but I certainly did not find them. I do not think it is because everyone agrees, but I do think it is because everyone is so polite.

Fortunately the key note speaker on thursday adressed some of these challenges. Dr. Sheila Jasanof gave a wonderful talk about the border between science and politics, between knowledge and actions, and why this border is so seldom bridged. Her answer was that one of the problems is that we believ that there is a linear movement from knowledge to action, and that the wrongly held belief that science is neutral and should not be involved in the messy compromises that is politics is one of the barriers against necesarry action on among other things climate change. You really should hear her talk. I think it will be available on the coneference homepage.

Southern Sudan is the latest country in Africa, after a referendum gave the result that 99 percent voted for secession from Sudan. I think this is good, I’m for self-government. The international community has also largely applauded the new state.

Southern Sudan has many problems, and it is not difficult to imagine that the country collapses. Yet the country is accepted in the international family. I am therefore rather surprised that Somaliland is not accepted in the same way. Somaliland seceded from Somalia in 1991. Since that time the country has been mainly in inner peace – as opposed to the rest of Somalia. It has conducted elections and peaceful changes of power. The state has control and prevent pirates to establish themselves in the area.

There have been border disputes with Puntland, another autonomous part of Somalia, and the boundaries are not completely accepted percentages. It can be a challenge for a new state.

However, I think it is time that Norway and others take Somaliland into the family of nations on line with others. Could we do it with Kosovo, South Sudan, and eventually with Palestine, it is about time and to do it with this democratic Muslim country? I think this is the community that need our support – and deserve it.

The counter-argument is that you open up a whole Pandora’s box of these processes if you start.  The borders in Africa are based on colonial boundaries and not always sensible from cultural or linguistic boundaries. I do not think there will be a big problem, mainly because current Somaliland was a separate colony – British Somaliland – and that, therefore, may well say that there is still the colonial era, boundaries that count.

What do you say Gahr Støre and Clinton?