Today, the Norwegian national budget will be presented. While there will be a lot of money to support carbon capture and storage, as well as a lot of money for the worlds forests. However, the budget will also show that we are not using enough on climate.

In 2010, Norway exported 77,954,000 tons of crude oil, the equivalent of approximately 245 million tons of CO2. A CO2-quota in the EU market has had a price between 12 and 30 euros for ton. This means that the CO2 cost of the Norwegian oil exports is between three billion and 7.3 billion euros. This corresponds with the current exchange rate between 22 and 54 billion Norwegian kroner.

In 2010, the Norwegian government’s transfer to the oilfund was 181 billion Norwegian kroner. This means that we ought to, just to compensate for the CO2 from this oil, (I have not included gas, condensate and NGL export) should use between 12 and 30 percentages of the oilfund on stopping climate change at least if we wish to make up for the problems we are causing.

In this context, the costs to establish CO2 capture and storage are trivial. If we want to have a clean conscience for our oil export, we should spend far more each year to find ways to mitigate greenhouse gases from our oil.

Yesterday, more than 75 percent of the Greenlanders voted for increased self government. Only one area had a no majority. According to the Norwegian daily, VG, many Greenlanders see this as a step towards full independence. The vote has been welcomed by the Danish Primeminister, Anders Fogh Rasmussen. According to Jyllandsposten he says (my translation): – The proposal for greater self government for Greenland has broad political backing on Greenland as well as in Denmark. 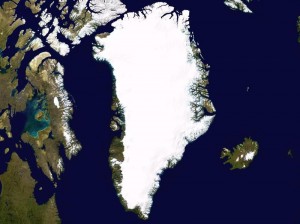 The worlds largest island takes another step towards independence. Photo:NASA/Wikipedia

It will be exciting to see how this develops. An important question will be if Greenland is economically able to support full independence. Today they receive funds from Denmark. Greenland has about 57 000 inhabitants. Independence wil of course be more expensive than todays homerule. Many Greenlanders hope that oil will be found and that will give them the possibility. This is also mirrored in the first comments from Johan Motzfeldt, leader of the social democratic party, Siumut. He said my translation):

The first area we want to take control over are resources. Now we have a mandate to do this.Afterwards we are going to launch a program to exploit this economically for Greenland.

Sermitsiaq writes in an other article that the Scottish company, Cairn Energy PLC is the biggest player in the Greenlandic oil sector. They received two new liscenes off South Greenland just days before the referendum, where the future resource incomes has been the most important theme.

It is the Danish parliament will make the final provisions for what powers should be transfered from the Danish government to Greenland.

You can find individual results from the referendum here.

The EU has for a long time taken slight interest in what has been happening on its northern Arctic periphery. That is set to change. The Commission has just released a communication to the parliament and the council on “The European Union and the Arctic Region”. This could be good news, it could be bad.

A communication like this is often the first step leading to a thorough policy from the Union. The first step is actually quite interesting and , I believe, sets the Union on a right path. Except that is, that this document as so many documents today is schizophrenic. On one hand it makes all the right noises about climate change and the environment. They write beautiful words, such as these:

The vast sea and land spaces of the Arctic region are vital and vulnerable components of the Earth’s environment and climate system. Arctic air temperatures have been increasing twice as much as the global average. Coverage of sea ice, snow cover and permafrost have been decreasing rapidly, triggering strong feed-back mechanisms that accelerate global warming. Accelerated loss from the Greenland ice sheet would raise sea levels rapidly and considerably. In spite of harsh conditions, melting of ice and new technologies will gradually increase access to Arctic living and non-living resources as well as to new navigation routes. Although the Arctic remains one of the most pristine areas on Earth, it will be increasingly at risk from the combined effects of climate change and increased human activity.

It seems that they understand the problem, I thought, for about half a minute. That was the time it took me to reach this paragraph:

Support for the exploitation of Arctic hydrocarbon resources should be provided in full respect of strict environmental standards taking into account the particular vulnerability of the Arctic.

So climate change is extremely important, but we still need to drill for more oil and gas. Somehow that double standard, seen often these days, keeps amazing me. Still I guess it is a step forward the climate change actually is put first in the document. And, truth be told, no other governments are less schizophrenic. I guess there are two good reasons for actually exploiting arctic hydrocarbons. It could possibly make the EU less dependent on Russian natural gas, and natural gas could replace coal fired electricity. I don’t believe either scenario.

However the document contains more than climate change and hydrocarbons. It sets a very interesting path for multilateral cooperation in the Arctic, within the framework of UNCLOS. Even more interesting it ponders the possibilities of setting up new legal frameworks in the Arctic. I think that it would be very good if the parts of the Arctic not under national sovereignty could be handled in the same way as the Antarctic is handled. With a treaty that protects the environment an demilitarizes the polar basin. I have been thinking about this more as a dream, but with the EU warming to the idea it could be a distinct possibility.

The full implementation of already existing obligations, rather than proposing new legal instruments should be advocated. This however should not preclude work on further developing some of the frameworks, adapting them to new conditions or Arctic specificities.

I tmight still be a dream, but it is a nice one.

The Arctic is melting – drill for oil. That is the response from the European Commission at least if we are to believe the EUObserver, that writes:

Drilling for oil in the fragile northern environment must go ahead with European financial and political support for the sake of EU energy security, energy commissioner Andris Piebalgs declared on Friday (19 September) at a debate on the subject in Brussels.

“You cannot say [the Arctic] is a sanctuary,” said the commissioner “… otherwise, where will will we get our energy from?”

The lack of logic is of course amazing. We are doing badly, lets do worse. But is is a good example of how we have com in this predicament at all. To continue doing what we are doing is the most important thing. The lack of imagination is mindgobling.

So you say, is there really such a thing as global warming? I dare you to look closely at the graph below.

However, the EU is not the only ones that is looking north. I have written about it here, but take a look at this quote from the same EUObserver:

In August last year, a Russian submarine planted a flag on the Arctic sea floor underneath the North Pole, while on Wednesday (17 September), during a meeting of the country’s security council, President Dmitry Medvedev set in motion plans to claim part of the Arctic shelf as national territory.

The move will “turn the Arctic into Russia’s resource base of the 21st century,” he said at the meeting.

Meanwhile, Conservative Canadian Prime Minister, whose nation also has competing claims on the north, has also pledged to assert Arctic sovereignty while campaigning ahead of the country’s 14 October federal election.

Too many people sees dollars where they should see warning flags